My Psychiatrist Dumped Me a Week Before the World Shut Down 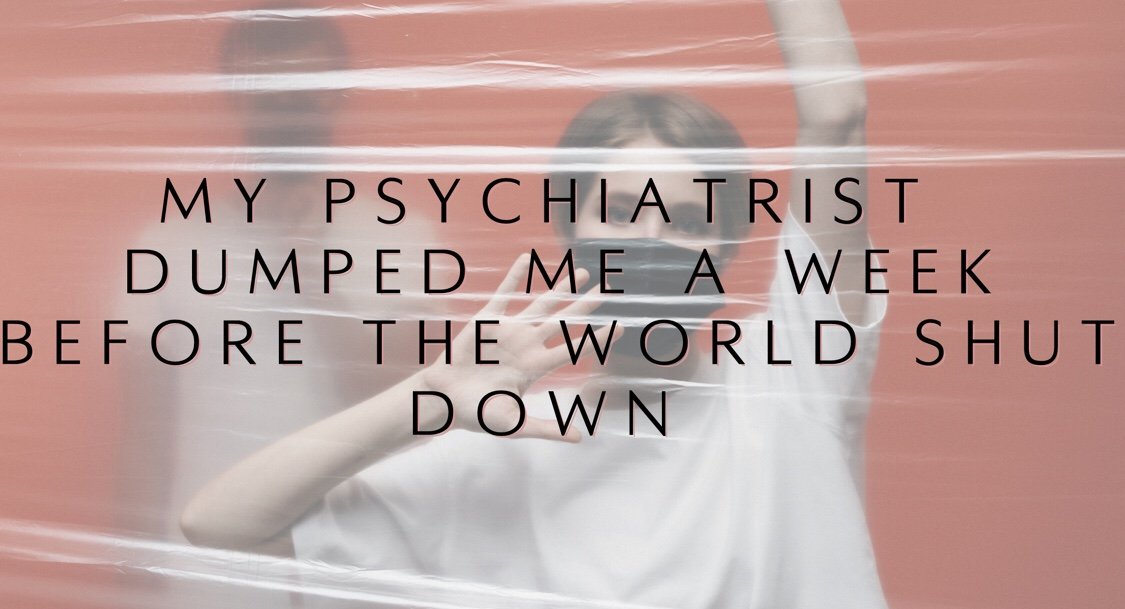 After being on different trials of medication since my son Franco was born, I thought I finally found the one that would work. The past year had many transitions and struggles which unfortunately led me to feel that it was not working for me. My anxiety and depression increased and found it hard to complete simple tasks.  In agreement with my therapist, I decided to call my psychiatrist and make a sooner appointment than already scheduled. I was lucky to get in the next day and just assumed it had to do with a cancellation opening.

I went in hopeful that things were going to change moving forward and this was the tool I needed to help me get back on track. I sit down in my doctor’s office and noticed something wasn’t right. There were no pictures on the walls including all of his degrees and licenses. Before I could say anything he said ” So, you are here for your last appointment?”  I just stared at him and barely got the word “What?” out.

He asked insincere, “Someone was supposed to call you and let you know I am no longer practicing at this location and you are here today to prepare a discharge plan.”

”How would I know? No one called me!” I raised my voice out of fear and anxiousness.

” I just called yesterday and no one said anything to me.”

”Oh,” he said quickly, “well I moved to a different practice and you are welcomed to join me there, otherwise I can provide you with a list of providers you can try.”

There were two problems though, his new practice was too far of a drive for me and the list he provided was so old and unreliable, some providers weren’t even practicing anymore.  I had such a look of disgust on my face I couldn’t even say anything.  He told me I didn’t need to decide now and he would provide me with one more refill of my current medication. I explained to him the medication I was taking were not helping and possibly making things worse and I did not want to continue them anymore.

”Well, if that is the case then I think it would be best to part ways and for you to see someone new.” He didn’t even look me in the eye and continued to type on his laptop.
At this point I realized my psychiatrist of 8 years has given up on me. I am too complex to fix and he just didn’t want to try anymore.  I quietly nodded my head in agreement and didn’t listen to anything else he had to say. I left feeling pretty hopeless and hurt. The first person to ever give up on me was my own psychiatrist.

Taking this as a blessing in disguise, I called and emailed over 20 providers the next day and was able to land an appointment with a practitioner who was highly recommended by a friend. I was able to get in by the end of the week.

I was re evaluated and was put on some brand new medications I have never tried before. I was nervous but excited to make another appointment in four weeks to see how I was doing.

A week after my initial appointment, a pandemic has been declared and a national shutdown started to begin.

Schools and businesses have closed, and I was forced to work from home while trying to take care of my son. Fear was instilled into us and grief started to take over all while trying to live a new life.  I never thought over the past month I would lose a loved one and not be able to say goodbye, try to explain to my four year old why he can’t go to school anymore and work from home acting like nothing has changed.

Feeling like a failure as a mom, wife and employee, my guilt was sky high and so was my anxiety. I had no idea if my medication that I just started to take was even working.  Thankfully, I continued to work with my therapist and prescriber through virtual therapy and I feel comfort in that.

I have felt a lot of anger and resentment these past 10 months, but I have no one to blame. I want to blame my psychiatrist for doing this and the system for allowing this, but for me I saw it as a blessing in disguise.

Unfortunately, this is not the case for everyone.

Resources during this time of uncertainty: Crisis Text Line-Text HOME to 741741 to connect with a Crisis Counselor.

Be kind, be hopeful and for the love of God, psychiatrists, please don’t give up on your patients.